Presidential aide Tolu Ogunlesi and the Minister of Transportation, Rotimi Amaechi made the announcement on Saturday, July 18. President Muhammadu Buhari

The railway complex in Agbor is the center of operation which connects the Itakpe-Warri rail line to the Lagos-Calabar coastal railway project, which cuts across most states in the south-east and south-south.

“BREAKING | President Muhammadu Buharihas approved the naming of the Railway Complex in Agbor – the operational hub of #ItakpeWarriRail Line – after former President @GEJonathan. It will be known as the Goodluck Jonathan Railway Station & Complex — Minister of Transport, @ChibuikeAmaechi.” 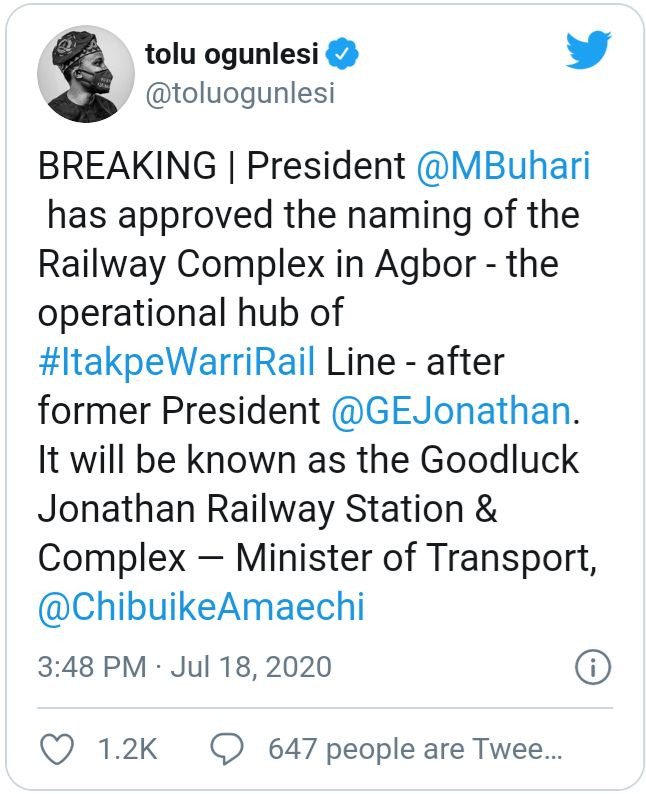 Today, we continued test-run of our new coaches on the completed Itakpe-Warri standard gauge rail line. We’ve named the largest station on this route – the Agbor railway facility and station after former President Goodluck Jonathan. Soyinka: Obasanjo Is Right, Nigeria Close To Extinction Under Buhari

The All Progressives Congress has defended the fuel price